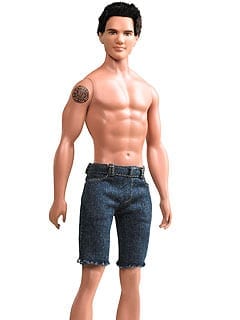 I picked up a copy of People magazine the other day only to find out that in many cases, there is still the perception that men are worth more than women. Gheez fellows, you would think in the year 2009, we'd have put this behind us, but pay differences still exist.

Here is a shiny example. Country superstar Taylor Swift and New Moon star Taylor Lautner, (who happen to be dating), will be reunited on toy shelves next spring. Swift will sell for $19.99, including guitar, while Lautner's doll will retail for $24.95. What's wrong with this picture?

Are we continuing to reinforce the message that men are worth more than their female counterparts? I certainly hope Swift's people put up a stink and give this year's Entertainer of the Year the price tag she deserves!