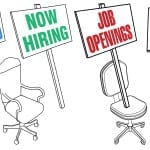 Is it me or have the number of “Help Wanted” and “I’m Hiring” posts been multiplying over the past year? So much so that some companies are sounding desperate, rather than attractive. It’s going to take a lot more in this competitive hiring market to land top talent than posting signs online saying that your company is  hiring. It’s going to take Talent Magnetism.

Think about people you’ve worked with over the years who you’d work for again tomorrow if the opportunity arose. What is it about those people that pulls you towards them? Did they always had your back? Did they encourage you to propel your career forward, even if that meant they’d have to hire and train someone else to replace you? Did they provide you with opportunities to do challenging work? They certainly did something.

In fact, the other day I was sitting on the beach listening to two guys talking about their former boss Ray, who had left their company five years ago. They mentioned how amazing he was and how things hadn’t been the same since he left. Sadly, I was the one who had to give them a reality check. Here’s what I said. “Listen people. You need to get over Ray. He’s not coming back. In fact, he’s retired. You have choices. You can  honor him by being the type of leader he was and pay it forward. You can also find another Ray in another company. But what you can’t do is mourn him for the next twenty years.”

My guess is that if there were more Rays, there would be less “I’m hiring” posts, as few people would leave a guy like that. The key to standing out in a crowd of postings is not to have to post in the first place. That’s right. Take care of the people who are in your chairs and they will stick with you through thick and thin.