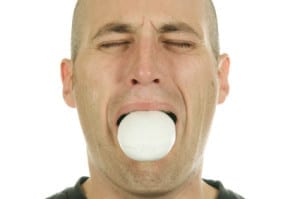 I flew down to Florida today on a flight that would have been perfect, except for the two foul mouth people behind me. My seatmate and I cringed every time one of these guys opened up their mouth. If I hadn’t turned around, I would have assumed they were high school kids who thought using cuss words every five seconds was a cool thing to do. Upon landing, one of the guys called his mom and used the same exact language with her. My seatmate couldn’t resist asking if he used that same mouth with his mother. He said he did. My seatmate continued the conversation and learned that the passengers behind us were graduating from pharmacy school this year and would soon be looking for jobs.

Imagine the look on their faces when I turned around and told them that I had heard everything they had said and was put off by their language as well. They were talking so loudly that I could hear every word, even though I was wearing  my Bose Noise Cancellation headsets, which means that other people on the plane must have heard them as well. They got really quiet when I told them that I help companies like the ones they want to work for hire talent.

I probably should have told them this as we were taking off, as all I heard after saying this was the sound of silence.