The Real Truth About Promotions at Work 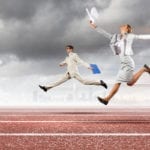 How to Win Your Next Promotion

Be honest. How long have you been thinking it’s your turn for a promotion and what exactly have you done to move your candidacy forward? Here’s the thing. It’s not enough to think about a promotion. There are a number of steps you need to take in order to make this happen. Here are three.

First, you have to make it known you’re interested in moving up. Yes, I know, it would be lovely if your boss tapped you on the shoulder and told you she thought you were due a promotion. In reality, that rarely happens. The promotions go to those people who let the boss know they are interested in taking on more responsibility. These people also let their bosses know why they should be considered above all others.

That’s why the second thing you have to do is self-promote. Right about now, many of you are thinking, “Nope. Not going to do that! I hate people who do that.” Most likely the people that you really hate are the ones that passed right by you and took the promotion you felt was yours.

I’m not advocating that you be obnoxious. What I am saying is that every now and then, you need to remind your boss of the value that you’re adding to her department. You’ve got to keep her informed about the new skills you’ve acquired and how those skills will be an asset to the organization, as you move ahead. I call this strategic bragging, which I talk about into detail in my latest book, Suddenly in Charge. This is where you weave in stories about some of your accomplishments that most people are not familiar with. You do so in a way that makes you a person of interest.

You must invest in yourself. Companies have limited resources and if you’re lucky, they may send you to a $99 one-day seminar at the local Holiday Inn. If those really amounted to a lot, you’d have tons of well-qualified people ready to move into their next positions. The most successful people I know took ownership of their own career development. They went to their boss with a plan and asked for their boss’s input. They also asked for support. If they were turned down, and some were, they made it a point to find the resources so they could move forward. Why? Because they knew they were ultimately responsible for advancing their careers.

As you think about the next step in your career, do a bit less thinking and take a lot more action. And it won’t be long before you’re the recipient of that promotion you’ve been dreaming about!

Simply thinking about your next promotion isn’t going to get you one. I’ll be conducting a teleconference on Friday, December 1st to help people obtain a promotion in the New Year. Your investment will pay off tenfold, when you receive a raise with your promotion. You can register here.