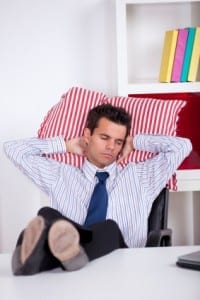 Companies everywhere are trying to reign in spiraling costs. The first thing to go is usually pay increases. But is this approach costing or saving organizations money?

Eliminating pay raises, particularly for top performers, costs more than you think. Here are five signs that indicate you might have made a mistake by telling your top employees they will be receiving a zero percent pay raise this year for all of their effort.

You used to smell the coffee brewing when you arrived at the office at 8 am. Those were the good old days when you could count on Mary being at her desk by 7 am. Now you are lucky if Mary gets in by 9 am.

Fast forward to lunchtime. You search for a staff member to assist you on a time sensitive problem, only to find out that you are the only one who hasn’t left for lunch. What’s going on? It’s not even Friday! The office is like an empty sea of cubicles come 5 pm. No one seems to care that the big pitch to a major client is due in two days. You are in your office trying to brainstorm–with yourself.

It never used to be like this. You had a hard time beating people into the office and there was always someone there when you were burning the midnight oil. Your professional employees appear to be acting like hourly workers.

Your Employees are looking quite fit

Remember the good old days when your employees looked tired and worn out? They used to complain that they never had time for the gym. You’ve recently noticed that many of them are looking quite fit. That’s because they are. They are no longer bench pressing panini’s at their desk. Instead, they are actually taking lunch and using the weight room at the on-site gym. Imagine that.

Your star manager Tom is no longer attending after hours networking events. That’s because he’s replaced networking with NetFlix. Tom now spends his free time enjoying all the movies that he missed, when he used to be out networking on behalf of the company. Be grateful he hasn’t asked you to pay for his monthly membership.

Turnover seems to have spiked

You’ve just lost four top account reps to the competition. That’s never happened before. Get used to it. If you aren’t prepared to recognize and reward your star performers, someone else will.

It’s hard to put your finger on it but no one seems to be smiling these days. Your customers have even complained that they are being treated like second-class citizens. Think there might be a direct correlation?

If you still believe that the bottom line is healthier because you’ve decided to give out zero percent pay increases to top performers this year then consider this. It might be time to automate your entire business because it won’t be long before you are the only employee left.