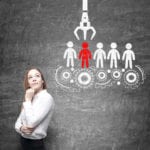 I was visiting a Fortune 500 company that was struggling to fill jobs and retain talent—A challenge many of you have. They have a record number of job openings, and employee turnover is on the rise. Growth plans have been put on hold, as they don’t have the workforce to extend their reach. Their executive team was tired of working day and night, with no end in sight, to resolve this situation.

During a session I was facilitating, an executive shared a story about the loss of a top executive on his team, who had just been poached. He said he never saw this coming. Others sat by as if this situation couldn’t possibly happen to them. That was until I pointed out how they could be next.

In their effort to help investors and customers learn more about their management team, someone in the company decided to include a link to each executive’s LinkedIn profile. On paper, that might have sounded like a great idea. In reality, that decision cost the company dearly.

A headhunter discovered a candidate she was interested in pursuing, clicked the link, and began a conversation with the executive, which eventually resulted in a job offer. Several weeks later, that executive was gone.

I don’t want something similar to happen to you.

That’s why I’m offering you a free copy of my new e-book, The Executive’s Guide to Creating a Solar System of Talent (a 15-minute read), which is jam-packed with approaches, untapped resources and useful guidelines on how to successfully assemble and create a team of superstars. I also delve into what you can do to create a force field around your company, which will prevent others from plucking out your talent.

Drop me a note at Roberta@matusonconsulting.com and put “E-book” in the subject line and I’ll be sure to send you a copy.