How to Sell More Women On Sales Leadership Roles 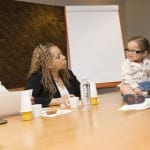 If you look around, you’ll notice there are significantly fewer women in sales leadership roles than men. Betsy Myers, Founding Director of the Bentley University Center for Women and Business Workplace That Work believes there are a number of factors that are contributing to this imbalance.

A pipeline in need of filling

Myers cites the fact there are fewer women in sales, which means there are less women in the sales leadership pipeline than men. The 2015 Closing the Gender Gap in Sales study, conducted by The Guardian Life Insurance Company, supports what Myers is saying. The study revealed the following:

Myers suggests that businesses need to do a better job of selling women on sales as a career. A sales career provides you with flexibility to set your own schedule and to be compensated based on your efforts, regardless of gender. According to Myers, the question that companies need to be asking is, “How do we have a conversation with women that enables them to see this career can give them the life they wish to have?”

Kate Rogers Coppins, Division Director of The Boston Beer Company, has had a very successful career in sales and in sales management, although it hasn’t always been easy. “The greatest challenges I faced were not from managing my business or a large team internally, but instead from the external forces of the industry I chose.” Coppins goes on to say, “While my company has always supported the growth of women in the sales force, it is still difficult for men to understand the unique challenges women face in a male dominated sales industry.” As a result, Coppins spearheaded a program to bring the women in her sales organization together to both celebrate successes and to support each other in their challenges. “A program like this would have benefitted me as I started my career in sales management,” notes Coppins.

“We need to mentor young women who are entering the field of sales and business so they succeed,” says Myers. “This will help them increase their confidence and aversion to risk.” Education, is also power. Myers points out that Bentley University now has a sales concentration. The fact that a top ranked university is now offering sales as a concentration adds credibility to the idea that sales is much more than a job. It’s a career.

Coppins suggests that companies consider a formal mentoring program where higher level female leaders are taking an active role. She believes that high level leaders, both male and female, should actively try to understand and recognize the challenges that are unique to women in their company. “Empathy can go a long way,” states Coppins.

Coppins believes it’s important for companies to identify the potential future female leaders in their sales organization and encourage their development and advancement. A company cannot sit back idly and expect these women to identify themselves, as social norms ad women’s career expectations may not be in alignment.

The first step in creating change is to admit that something isn’t working. Only then can you begin to identify why this is so and begin to work on changes that will be everlasting.

Are you transitioning into a sales leadership role? If so, call me at 617-608-3633 to see if my Rapid Results Coaching program is right for you.