Why Now May Be The Time To Quit Your Executive Job 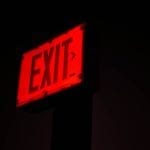 Is it time to exit stage right? Photo Courtesy of Ernest Billo-Unsplash

General Electric just told the city of Boston that they were scaling back their plans to grow the Boston HQ significantly. While that move alone may not mean much to you, they have to reimburse the state $87M of incentive money given to them when they agreed to move their corporate headquarters from Connecticut to Massachusetts. In a nutshell, the company is doing what’s best for them. Can the same be said about you?

Here are four questions to consider when evaluating if the job you have is worth continuing.

If your work is no longer making you happy, then I say quit!

I’m holding free confidential sessions this week for executives who want to discuss their situation. Reach out to me at Roberta@matusonconsulting.com or call me direct at 617-608-3633.

Not available this week? E-mail me and we’ll get a call on the calendar for early March.