Magnetic Leadership: Promise Me You Won’t Be This Type of Leader 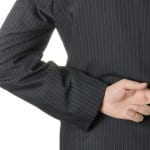 Imagine what it must be like to work for someone who keeps making promises yet never fulfills them. Apparently, it’s more common than we think. According to a 2007 Florida State University Study, two out of five bosses don’t keep their word.

I can only think of a handful of acceptable reasons to break a promise you made to one of your employees. I’m not saying that things don’t happen or that something might legitimately get in the way of you keeping your word. Your actions after the promise is broken will determine what happens next.

For example, I find that most leaders hate confrontation. Rather than telling an employee why they are not able to keep a previous commitment, they instead pretend as if they never made the commitment at all. They figure the employee will forget about it, which is rarely the case. If you are unable to keep your word, at least have the courtesy of telling your employee why this is so. Many will stick by your side, as honesty is something that a lot of people are looking for from their bosses—and, as you’ve heard, it’s in short supply these days.

This posting is an excerpt from my new book, The Magnetic Leader, which is now available for pre-order on Amazon.