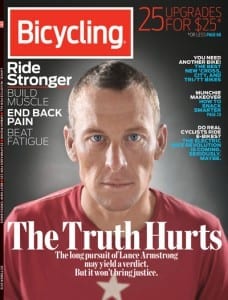 The following is a guest blog post written by Shawn Casemore, who works with businesses to improve operational performance.

The continuing allegations against Lance Armstrong have reached the point of near damning, tarnishing the once spotless reputation of someone who was deemed a true hero by the world.  Regardless of whether the allegations are true, Lance and his empire of Nike sponsorship, as well as the Livestrong brand, are diminishing rapidly.

Armstrong’s career has had a variety of ups and downs, the most recent of which will provide the greatest challenge yet for him to overcome. Fortunately, there are some lessons that business leaders can derive from Armstrong’s mistakes to avoid the collapse of their empire:

1. There are no shortcuts.

In his book “Outliers,” Malcolm Gladwell speaks of mastery requiring 10,000 hours of practice to reach, which he connects with business leaders like Bill Gates, who started programming during his early teenage years. There is rarely a shortcut worth taking; rather, greater value is in accelerating results. Business growth requires investment in marketing; employee development requires training and mentoring; customer relationships require effort to nurture and grow. There is no shortcut, but through a regimented and targeted focus, you can accelerate results.

2. Better to say something than nothing.

Steve Jobs was known for his over-the-top responses when an employee presented him with a new idea. The idea was either (insert profanity here), or it was the best idea ever. As a leader, how do you respond to new ideas from employees, customers, or suppliers? Think about the last time an idea you had was shot down quickly by someone. It was clear the idea wasn’t considered for its merit, and in effect it wasn’t appreciated. Consider the means by which you solicit and respond to ideas from those around you. Are you reacting without consideration, or simply not responding at all? In business, silence doesn’t necessarily suggest guilt, as in the case of Armstrong, but it does suggest lack of interest. How motivating is that?

3. Endurance is as important as speed.

In business, speed is often said to be everything. Mere survival is often pegged to being the first; the first to reach a new market; the first to launch a new product; the first to hire skilled employees. But endurance, the ability to sustain a fast pace, is just as important as speed. Remember the United States Football League (USFL)? Trump launched the organization in 1983 as a football league that would operate during the spring and pre-fall seasons so as not to complete with the NFL. Despite the early success of the league, a series of poor franchising decisions and ultimately the decision to compete directly with the NFL resulted in the league ceasing play in 1987. If you’re going to come out of the gate running, be it with an idea, new product, or business investment, you had better be sure the pace is something that you can sustain over the long-term.

I would suspect that the challenges you deal with, and their impact on your reputation and ability to engage with others, is not to the same degree as those of Lance Armstrong. But the fact remains that if you are a business owner or leader, your staff, peers, customers and suppliers all regard you as a professional, with character and strength.

And what do I think will become of Lance Armstrong? He will come clean, write a book, and promote the banning of performance enhancing drugs in sports, of course!

For more information on improving operational performance, visit our website at www.casemoreandco.com.