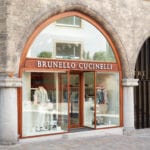 I love all things Italian. I mean, who doesn’t? And I now love Italian born Brunello Cucinelli, although we’ve never met! At least not yet.

I watched with interest this week’s CBS Sunday Morning, which featured Brunello Cucinelli, who is both a world-class luxury clothing designer and a humanitarian. His story is impressive, and his approach to business enlightening.

Hope he inspires you as much as he has inspired me.

Brunello Cucinelli was born into a peasant family in Castel Rigone, a 15th-century little hamlet nearby Perugia in 1953. To say he was poor would be an understatement.

Cucinelli recalls watching his father return from what was a very unwelcoming environment. In an interview conducted by Om Malik, he was quoted as saying,

“From the teary eyes of my father. When we were living in the countryside, the atmosphere, the ambiance — life was good. We were just farmers, nothing special. Then he went to work in a factory. He was being humiliated and offended, and he was doing a hard job. He would not complain about the hardship or the tiny wages he received, but what he did say was, “What have I done evil to God to be subject to such humiliation?”

This experience inspired Cucinelli to nurture his dream of a capitalism that enhances the human being.

Cucinelli went on to say, “Basically, what is human dignity made of? If we work together, say, and, even with one look, I make you understand that you are worth nothing and I look down on you, I have killed you. But if I give you regards and respect — out of esteem, responsibility is spawned. Then out of responsibility comes creativity, because every human being has an amount of genius in them. Man needs dignity even more than he needs bread.”

Building a Successful Business Without Breaking Your People

If you think you have to squeeze every ounce of dignity out of your people to experience significant growth, think again. Brunello Cucinelli S.p.A net revenues for 2018 rose by 8.1 percent at current exchange and 10.7 percent at constant exchange rates to reach 553 million euros (626 million dollars).

Here are seven beliefs that Cucinelli has applied to his organization that you can use to grow profits humanely.

1.   No one in the company is permitted to work past 5:30 PM. In this company, you cannot send emails after 5:30 PM, when the company closes for the evening. Cucinelli believes it’s essential to have time off to recharge your battery. He also believes employers should not intrude on their employee’s personal lives.

2.   Employees receive a 90-minute lunch break, and at the corporate office in Italy, most dine at the heavily subsidized company dining room. The food served there resembles that of a five-star dining experience, as opposed to a casual fast food restaurant.

3.   No emails can be sent to more than two addressees, just one or two. No group mailing. Cucinelli asks, “Why must a single email be read by 10 different people unless it’s the 10 people who are interested in that specific issue? In order to disperse responsibility?”

4.   Mobile phones are not permitted in meetings. Cucinelli wants people to look at one another in the eye when they speak to each other. He also wants people to come to meetings prepared. They shouldn’t need their phone to search for information they should have on hand.

5.   Everyone is a genius. Cucinelli believes in the human being, and that this is the creativity of a company — “Let’s say you have a company with 1,000 people. Maybe we were told that there are only two or three genius people in the 1,000. But I think that if you have 1,000 people, you have 1,000 geniuses. They’re just different kinds of genius and a different degree of intensity.”

6.   Employees and vendors are paid well. For the most part, Cucinelli pays his suppliers and staff 20 percent more than the average on the market. He does so because he believes it’s the right thing to do.

7.   Work-life balance matters…a lot. Cucinelli is interested in the quality of working hours, not the quantity. He’s quoted as saying, “Do you think that during the first five hours of the day you are the same as you are in the last five hours? No way. You’re tired, and if you’re tired, you stop listening, and the decisions you make are risky.

Tell me which ideas spoke to you and what you vow to do to create a more humane work experience for your employees. Reach out to me at Roberta@matusonconsulting.com to discuss this further.