Job Searches Are Up As Snow Falls Down 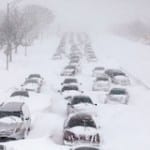 It’s been a tough winter here in New England. Over the past several weeks we’ve been blessed with three major snow falls. Accumulation on the ground, as of this writing, appears to be about three feet. More on the way.

I’m hunkering down and catching up on my writing. However, it appears  I’m not the only one taking advantage of this time to move my New Years resolutions forward. Job site Monster just released a report on the impact these winter storms are having on businesses. It turns out that while most companies shut down in the North East last week for Winter Storm Juno, many of us were still thinking about work — just not our current jobs. According to search data from Monster, in cities where forecasters predicted several feet of snow — but the storm ultimately delivered inches or less — people used the unexpected day off from work to look for a new job.

The report from Monster revealed that searches for jobs in New York City, which received less than 10 inches of snow, were up 40% over the previous Tuesday. In Philadelphia, where they expected a foot of snow and received just a dusting in some areas, job searches were up 45%. And nearby to New York City, in White Plains, job searches spiked by 72 percent week-over-week. That’s a lot of looking! I expect we’ll receive a slew of new job announcements in three month’s time.

As a leader you know you won’t be able to hang on to everyone forever. In fact, you probably have some people on your team who you hope will go sooner, rather than later. (We’ll save that issue for another post.) However, there are things you can do right now to convince people that it’s better in your employ than elsewhere.

Start with you. Your job as a leader is to make sure your people have opportunities to develop and grow. When is the last time you tapped one of your high potentials or new managers on the shoulder and suggested he or she attend a program that will improve their skills? Some of you may be thinking that I don’t have the budget to send them offsite or I can’t commit the time. In less than two weeks, I will be facilitating a Move Up/Manage Right virtual program for leaders interested in dramatically boosting their leadership skills. The price is right, as is the location. Consider registering several of your people today, before they take a day off this week to go interview with one of the companies they’ve been speaking with on their snow day off.