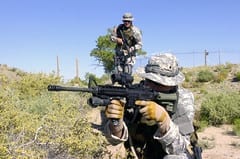 Imagine taking your eight and ten year old to a PG movie and seeing this image in the previews? That’s exactly what happened yesterday when we took our kids to the Cinemark cinema to see Hotel for Dogs. I don’t let them watch war movies at home and we don’t purchase toys with guns. So why would I find it acceptable for them to view this on the big screen?

Showing a commercial (and a fairly graphic one) for the National Guard as part of the previews of a PG movie, playing on a weekend afternoon is simply crazy. I know I was outraged. I can’t imagine how the parents of the five and six year old felt.

So it should not come as any surprise of today’s headline in the NY Times, More Joining American Military as Jobs Dwindle . I’m all for having the freedom of choice when it comes to jobs. But starting to recruit young people, who aren’t even close to adolescence, is wrong. Especially when they are a captive audience. (Try removing yourself from the middle seats of a crowded theatre.)