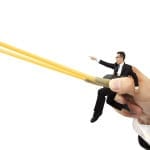 I get that companies are trying to do more with less these days and that the name of the game is delegation. What I don’t get is placing hiring managers on the front line without giving them the tools they need to represent you well.

A neighbor of mine  is a recent graduate from RIT with a degree in Information Technology. He is also hard of hearing. He wears a cochlear implant and has overcome  many challenges in his lifetime. Any company would be lucky to have him as one of their employees.

Last week he had a job interview with a company in Boston. Prior to his interview, he was told to set aside two hours, which he gladly did. He arrived on time, after a two hour drive and was escorted to a conference room. He was then “interviewed” by a gentleman with a heavy accent, which made it hard for him to hear what the hiring manager was saying. After 15 minutes, the hiring manager told this young man that the other people he was supposed to meet with were all called into a meeting. Basically he didn’t have the guts to tell the candidate that he felt the fit wasn’t right. This young man left the office and immediately went to the recruitment agency that sent him to the interview. He was offended and puzzled. So was the agency. They confronted the company and the hiring manager, who later admitted that he lied to the candidate.

I’m a huge proponent of not wasting candidates time and being honest with them. The hiring manager could have simply said that he didn’t think that the candidate was the right fit for the job. He had no reason to lie. I suspect  this hiring manager has never had any formal training on interviewing. I also believe he has no idea how his actions have placed his company in a very vulnerable position.

How many of your hiring managers are putting your company at risk at this very moment? From what I can tell, the answer is lots. I often hear stories about discrimination around hiring from minority candidates and those who are over age 50. I don’t believe this is intentional. I believe this comes from ignorance.

There are no secrets anymore. All it takes is one post on a social media site that goes viral regarding the way a candidate has been treated and your reputation is gone. Why risk it? Every hiring manager should be required to attend a hands-on session on interviewing before they are permitted to represent your company. Don’t tell me you don’t have the time or the money to do so. You can save that line for your attorney or the CEO, who wants to know why sales are plummeting along with your company’s reputation.

Sign up for my complimentary newsletter to receive additional tips on maximizing talent.