Flying on an Empty Stomach 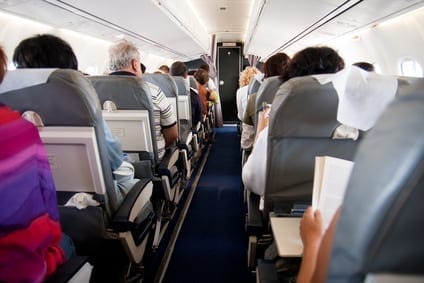 Last week, I took a non-stop flight on American Airlines to San Francisco. At least I thought it was a non-stop. Everyone on our full flight was strapped into their seats and we were ready for an on time departure. That was until the flight attendant announced that our 6.5 hour flight had a grand total of 40 meals for 180 passengers. She urged those who thought there was a chance they might get hungry, to deplane and purchase food so they wouldn’t waste away on the flight. A noble gesture indeed.

At first, no one stood. After all, would you want to be the only person responsible for keeping a full flight waiting at the gate? Then, one by one, people got up and went in search of food, while we sat at the jet way.

To err is human, so I figured that somewhere along the line, an entire tray of food wasn’t placed on the plane or that perhaps there was a spoilage problem with meals that were brought on board. Alas, that was not the case. When asked, the flight attendant told me that American no longer owns the catering kitchens where most of their planes land. Therefore, they only cater at their hubs. She went on to say that our plane was a red eye flight that had come in from San Francisco fully stocked. However, 140 people decided they were hungry, so we were left with a grand total of 40 meals for 180 people. You do the math.

I must say that I find it a bit puzzling that since this is their new norm, why American wouldn’t take this opportunity to change their procedures. For starters, they could make an announcement at the gate informing waiting passengers of the new norm and suggesting they pick up a meal instead of just hanging at the gate waiting for the boarding announcement. I was always taught that if you don’t have enough for everyone, then you shouldn’t eat in front of others. Perhaps American could apply the same principle. Either stock every flight fully or don’t put any food on board at all. Or, they could pay a little extra and purchase their meals at each destination and charge the passengers accordingly.

This is now the norm at American, at least according to the flight attendant, who begged me to write to their CEO to complain. I instead am choosing to share this with you, since I have a much better chance of changing your behavior than theirs.

The golden days of flying are well behind us. I would suggest that the next time you have a choice, choose another airline or pack a picnic lunch. And don’t forget to pack some extra food for that poor hungry passenger who hasn’t had a chance to read this posting yet.