The Easiest Way to Become the Person You Want to Be 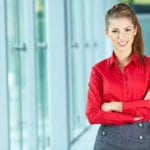 My mentor, Alan Weiss, says the easiest way to become the person you want to be is to be that person. I may be paraphrasing this, but you get my gist. Here’s what that means for you.

If you want to be seen as an expert in your field, then start acting that way. Instead, many people have self-limiting beliefs such as, “I have to get my certification before I will be seen as an expert.” Or, “When I finish my degree, I’ll go after that promotion that will tell the world, I’m tops in my field.” None of this matters when you start acting like you’ve already arrived.

A coaching client of mine came to me right after being passed over for a promotion. Naturally she was disappointed that her dream job went to someone else. However, she sure as heck didn’t want this to happen to her again.

We quickly assessed what was holding her back and then something interesting happened.

With my counsel, she began acting like a leader. She sought out problems and began to fix them. She volunteered to tackle the most difficult challenges in her department. She even began to dress differently. People started to come to her for advice and management began to notice.

One day, she arrived at work only to find out her boss had been fired. This time she didn’t wait to be overlooked. She went into her manager’s office and asked for her boss’s job. Two days later, she was promoted into his position.

Most likely, this promotion wouldn’t have happened had she wallowed in her disappointment and continued to operate as if she had, prior to her wake up call.

Nope! Instead, she made it clear that she was the only choice for this position.

As you look at your own situation, what kind of person do you want to be? If you’re fine with where you are at, that’s okay. If you’re not, then what do you need to do today to become this person?

We’ve got less than five months left in this calendar year. If not now, when?

Call or email me (Roberta@matusonconsulting.com) to discuss “The Me Project.” This is an eight-week coaching offering that I’ve put together for those interested in rapidly moving forward one goal that’s of utmost importance to them. Together, we’ll identify this goal and with complete focus, you’ll take steps to achieve what’s important to you.