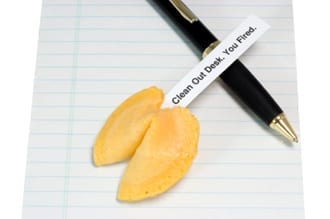 Last night I received a SOS call from my niece who experienced what it’s like to be fired for the first time in her life. In spite of the fact that this was a part-time job that she was working in while attending college, she still lost her breath when her boss told her that she needn’t bother to come in the next day. Now my niece is a pretty smart gal (and a Veteran) who fired back by asking one simple question. “Why?”

You would think this would be an easy question to answer for any employer who was handing someone their walking papers. Her boss mumbled something that in no way related to the question at hand and walked away. Before he could escape, my niece asked if she could use him as a reference, to which he replied, “Sure.”

My niece will survive this unfortunate event and will go on to make a ton more than the Bozo who just fired her. She could have eventually become a client, but this appears to be much less likely after yesterday’s event. The only thing that is certain now is that she will tell all her friends and they will tell all 10,000 of their friends not to work or do business with this company.

Listen folks, it’s time to man or women up here. The person you are firing deserves to be told why, especially if he or she has never been told their performance is substandard. Everyone deserves closure.

Firing isn’t about you. It’s about taking care when telling someone that life as they know it is about to change. If you don’t know how to do this, then read the chapter in Suddenly in Charge on Timeless Tips for Tactful Terminations.

And as if matters couldn’t get worse, my niece has been invited in for an exit interview next week. Seriously??? I told her to go, but only after she gets the answer to her question so she can have the closure she deserves.

If your company is located in Missoula, Montanta and you are looking for an awesome part-time worker, let me know. I just may know of someone.