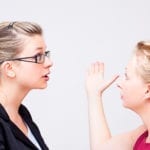 How Woman Can Rapidly Advance Their Careers. #ExecutivePresence

I remember the day I was promoted into the executive suite. I couldn’t believe the president of the company actually thought I was good enough to lead a department. In retrospect, it was that little guy on my shoulder wondering if I really deserved this. Flash forward many years later and I can see clearly what was going on back then. Not only was I good enough to run that department. I was frigging awesome!

Studies show that a lack of confidence is having a significant impact on women advancing in their careers. I see this in my coaching practice as well. Today’s WSJ, reveals that some 63% of women enter the workforce with the confidence they can rise to senior management compared with 75% of men, according to a 2016 study. By midcareer, only 57% of women still feel that way, compared with 66% of men, says Julie Coffman, a Bain partner and lead author of the study. Here are some ways women (and men) can significantly improve their confidence.

Change your self-talk. If I were coaching the younger me today, I would tell her that she needs to work on changing the dialogue she has going on in her head. Rather than thinking, “Why on earth would anyone seriously consider me for this job?” she should be thinking, “How lucky for them that I’ve accepted this new role.” In my coaching practice, I’ve seen how small shifts like this one can have a very positive impact on people’s careers.

I recently worked with a female leader, who was struggling to advance her career. During our conversations, she kept using self-effacing humor. So much so, that I had to call her out on her behavior, as I knew if she was doing this in our conversations, she was most likely doing the same when interacting with her boss. Here’s the thing. She had no idea she was doing this, until I mentioned it. During our work together, she worked really hard on her self-talk and soon thereafter received a promotion.

Changing one’s self-talk on your own is really difficult to do. If you’re serious about making this change, then find a coach or a psychologist to help you make this much needed shift.

Strategically brag. I’ve noticed that men are so much better at bragging than women. I mentioned the need to brag In a recent program that I facilitated on “The IT Factor: Executive Presence for Women in Tech” and you would have thought I just turned off the wi-fi! A number of the participants told me their work should speak for themselves. I asked them how that was working out! Eventually, they settled down and took notes.

Look, I don’t make up the rules. I just report what I see. You cannot expect your boss to recall all of your great accomplishments. It’s your job to let him or her know. And if you think your male counterparts are keeping all their wins a secret, you are greatly mistaken.

Here’s how to begin strategically bragging. Take out a piece of paper and jot down the the following:

Look at this weekly and weave in stories related to the items on your list, when you’re having conversations with your boss and their peers. And don’t forget to keep the list updated. Before long, strategic bragging will become a natural habit.

Take risks. Women tend to be more adverse to risk than men, or at least that’s what the studies would like you to believe. Is it true? I don’t know. However, here’s what I do know. When in doubt, just say yes. If your boss asks you if you are comfortable taking on a new area of responsibility that you have no experience in say, “Of course.” And say it with confidence. You can learn what you don’t know on-line or by hiring an outside expert to work by your side, as you figure things out.

Get used to failure. If you’re not failing, then you are not trying. Take a look at all the CEOs (mostly males), who get fired from their jobs only to resurface elsewhere several months later. Some take huge risks, with significant payoffs, regardless if they succeed.

Rather than asking yourself, “What happens if this doesn’t work out?” you should be thinking how awesome this new challenge will be. And so what if things go sour? It’s unlikely that 20 years from now anyone, including you, will even take note of this.

Want to learn more about the benefits of executive coaching? Reach out to me at Roberta@matusonconsulting.com with questions or if I can be of help.