Comcast: You are Here…Or Not 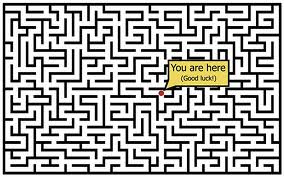 While everyone is screaming about their dissatisfaction with Apple’s new maps, we are left driving in circles due to Comcast’s inability to display a map that clearly indicates where their new offices are located.

Yesterday, I handed over our precious modem to my husband so he could pick up the new modem that Comcast guaranteed would speed up our Internet service. Of course that left me disconnected from the Internet, but what the heck, it was only supposed to be for an hour as the Comcast office is less than two miles from our house. At least it was the last time we looked at the Comcast map, which was about an hour before my husband left.

Imagine my husband’s surprise (and his blood pressure) when he arrived to find that our local Comcast office had moved across town to the town of Amherst. Being the good sport that he is, and knowing he’d have to face the wrath of his wife if he came home with the same modem he left with, he took the bait and went searching for the new office during rush hour.

While keeping his eyes on the clock to ensure that he got there before closing, he found himself zigzagging through neighborhoods that he never even knew existed. I gotta say, I think Comcast intentionally looks for locations that are hidden with the hopes that no one will ever find them. I don’t blame them, as a good number of their customers aren’t really fans. They are with them because they have to be, not because they want to be.

At last, he finally pinpoints the location just in the nick of time. He walks in and hardly receives an apology for failing to have a map that doesn’t clearly indicate that their old location no longer exists  I mean really, you’d think a company with that many IT people on staff could figure out the importance of making sure the Maps they are using displays the town they are actually in, rather than the town where they used to be.

It doesn’t matter how good your Maps software is if the people who are providing you with the location conjure up an image that looks nothing like the one you need to get to your location. Come on Comcast. There are enough reasons for people to rant about your service. Why give them more?