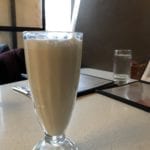 I had an egg cream today, in honor of my dad Sy Chinsky, who recently passed away at the age of 90. It was his favorite drink. He often told the story about how he’d save his pennies, and when he had enough money, he’d go down to the corner drugstore and treat himself to an egg cream. At the time, the cost for this drink was about a nickel.

As I sipped on the egg cream, I thought of him and what a pioneer he was. Writer, producer, Academy Award nominee, and former neighbor, Mark Fergus, of Iron Man fame, captured the true essence of my dad. Here’s what he wrote.

We are sending you love from the whole Fergus clan. I can’t imagine what growing up in Congers would have been like without the Chinsky house next door (Sy had the first VCR we had ever seen, the first Apple Computer, the first Hot Pockets!!) Your Dad will always be larger than life to us, a warm and welcoming presence, without fail, and an inspiration of big ideas.

My dad was years ahead of his time. Because of his foresight, we had the first color television, when the only programming that aired in color was the opening to The Wonderful World of Disney, as well as the first microwave on the block. Neighbors would come from near and far to watch a potato bake in our Amana Radarange microwave, in under eight minutes. Neighborhood kids would line up to experience three-minute hotdogs and the Hot Pockets that Mark referred to.

His efforts to pioneer didn’t stop there. He had a video camera, years before his contemporaries, and a Betamax video recorder that soon became defunct. He insisted on buying all of us kids a videophone (8X8) that none of us wanted so that he could speak to and see his children and grandchildren from afar. Then, of course there was the introduction to the first Apple computer. Regrettably, he didn’t purchase Apple stock!

He was the kind of guy that companies talk about wanting in their organizations but few dare to hire.

In memory of my dad, here’s what I’m requesting of you. The next time you come across a candidate, who is a bit out of the norm, give this individual a second look. Who knows, this person may wind up catapulting you into a future, you never imagined was possible!