Are Your People Willing to Walk on Hot Coals for You? 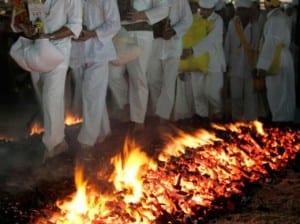 Are your people willing to walk on hot coals for you? If so, you should fire them (pun intended).

Nearly two dozen people were treated for burns on their feet after walking on hot coals during a motivational seminar conducted by self-help expert Tony Robbins in San Jose, California, local media reported. And to make matters worse, people were following those who went before them, in spite of the fact that they were wailing of pain and screaming in agony.

If you’ve got a bunch of people who are afraid to tell you that you are causing them or the company pain, then something is terribly wrong in your company. Perhaps they are fearful they will lose their jobs if they say what’s on their mind. Or they work for a manager who is known to quickly scold anyone who steps out of the line.

I encourage my clients to hire independent thinkers. People who aren’t afraid to tell them they are about to make a terrible mistake. Yes, these people may be harder to herd, but that’s okay as employees shouldn’t be treated as cattle.

Take a look at your current staff.  Will they stop you from doing any harm or will they simply follow you even if it means that in the end, everyone and everything will go up in smoke?