A Little Less Measuring and A Lot More Doing 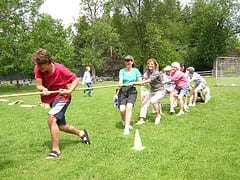 Another day, another poll from Gallup on employee engagement or in this case employee disengagement. Gallup’s “State of the American Workplace” report is being released this month, which indicates that not much has changed in terms of employee engagement since the Great Recession. Sure there has been a little improvement, but not much when you consider that only 30% of today’s working population identifies themselves as being fully engaged. So where does that leave the rest of the people? It’s startling to think that 52% of workers admit to being disengaged at work and 18% consider themselves to be actively disengaged in their jobs.

Let’s put this into perspective. Suppose you are playing a game of Tug of War with your competitor to see who will pull in a large account that can mean the difference between being profitable this year or having to close your business. Three of your workers are throwing all their weight and pulling frantically for you, five are pulling with one hand, while thinking about what they’ll be having for lunch, and two have decided to just stand there to ensure you don’t take home the prize.

If you believe like I do that there is a direct correlation between happy engaged employees and profitability then this should be of concern to you. Yet we continue to make little progress in this area. Companies invest hundreds of thousands of dollars to measure employee engagement and then do little with the results. I’d like to suggest that we do a little less measuring and use a little more common sense. Here’s what I mean by this.

A former client recently sent me a note regarding his experience working at a large financial institution. He recently accepted a promotion and a move into a new department and was waiting to make the transition. His soon to be old boss texted him and told him to move out of his cubicle, gift his computer to his new replacement and to await word from his new boss. He sat there confused, as all that he would be left with was his Blackberry for all company communication.  He’s at the VP level so you would have thought that he would have been treated a bit better than most, but this was not the case. He quickly went from being excited about his new post to wondering if he should have looked for a promotion at another institution. I’m willing to bet that the guy at the top has no idea any of this is happening and he’s continuing to survey every year as he looks for ways to improve employee productivity.

Engaging employees is not that difficult if you use some common sense and take action. Start here:

The competition for business will continue to heat up as companies fight for their share of clients. If everyone in your company is pulling for your team then you will more easily win your share of the business and will have more resources to invest in employee happiness.