A Day In The Life Of A Paparazzi 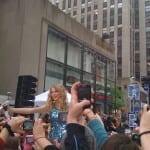 If someone would have told me that I would be spending one of my precious mornings in NYC stalking a celebrity, I would have told them they were crazy. However, this is exactly what I did this week on one of the coldest days of the year. I joined the ranks of the Paparazzi in search of Taylor Swift.

I didn’t start my day with the intention of trying out a new career, nor did I intend to become one of those crazy fans who camps outside the door of a well-known celebrity. But sometimes things happen and you have no choice but to go with the flow.

Looking back, I now realize my first mistake was telling my fourteen-year-old daughter that we were staying in the same neighborhood where Taylor Swift resides. Our plans to see some of the better known sites of NYC were quickly tossed aside for Taylor. It’s amazing how much research a teenager will do when the topic is of interest to her. With a flick of an I-Phone, we had a fairly good sense of Taylor’s whereabouts as well as her NYC address. Apparently our idea to visit Taylor’s flat wasn’t all that novel, as there were other teenagers standing their with their equally crazy moms.

It wasn’t long before Taylor’s security detail arrived to help pack up the superstar. Right behind them, was the paparazzi, who seem to travel in packs. You think you know exactly what someone’s job is, but you really don’t until you do it. I spent two hours standing in the freezing cold weather getting to know one of the photographers, who was a full-time fire fighter and a part-time celeb chaser. He warned me that we might be standing there for hours (a thought that I did not find comforting) and that there were no guarantees we’d actually see our celeb. He shared stories of leaving the job site for a restroom break or to grab lunch, only to find out that his target had departed while he was away. All the more reason for me to stay in place, even if it meant frostbite.

I was three hours into my new career and fantasizing about joining the pack on a full-time basis when the news arrived. Ms. Swift had indeed been in her apartment, only she was no longer there. She slipped out the back door just about the time I was capturing pictures of her luggage. I almost  cried, but my tear ducts were frozen. I turned around to ask my new paparazzi friend how much a picture of Taylor’s luggage might command on the open market, only to find that he had moved on. He was either on his way to the airport in search of Taylor or on route to the restroom. As for me, my stalking days are behind me. That is until this summer when Taylor tours in New England and returns to her home in Rhode Island.

I must say, I now have a heck of a lot more respect for the paparazzi now that I’ve walked in their shoes. Trying on the job of someone else should be a required exercise in every organization.